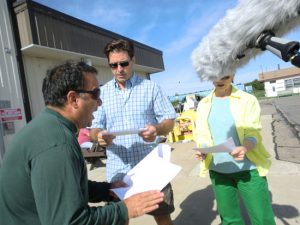 We’ve posted earlier about our love of recording on location, but we wanted to pause to gush a little bit about our preferred kit: the Rode NT-4 loaded with the Rode Blimp and Fishpole.

We’ve been using the NT-4 since 2007, for our first field recorded production Dark Passenger, but in those days our shock-mounting came from a DIY homemade style contraption made from a pencil case holder, painter’s roll, several elastic bands and a feather boa. It looked something like this: 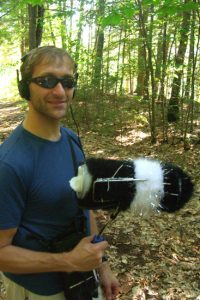 Mad props to sound man Randall Farr (pictured), who built the device which served us well for locations including beaches, woods, and lighthouses in Southern Maine. This wonderful prototype met its end during the recording of The Troll of Stony Brook and we found ourselves looking for a replacement.

It was actually Randy who suggested the Rode Blimp to me, and since I have a fondness for the brand (I had earlier that spring recorded some delicious M/S tracks with two NT2A’s for The War on Poverty), I began my research on the Blimp.

Reviews from Sweetwater were rave, and I found myself buying a boom kit that cost nearly as much as the microphone (~$428 with free shipping).

Two things made me decide not to go the DIY route again:

1 – The thing is backed with a ten year warranty so I consider this basically a once-for-life kind of investment (as opposed to recorders, computers, ProTools, etc. which I upgrade every couple of years)
2 – I really wanted to look professional on the set. I had some really top talent with me this time and I wanted there to be no doubt as to the professionalism of FinalRune.

To be honest, with the Rode kit and my Marantz recorder (recently upgraded with new Oade brothers pre-amps) we were recording with a very similar kit to what I had worked with on a BBC Radio 4 production a few months earlier. The only difference was that the BBC’s kit retailed for a little over $8,000 whereas ours, even after the Blimp, was around $1,500. So, I took the plunge.

Sweetwater delivered it in a matter of days with loads of candy. Yum. Now to get the thing unboxed.

While the Blimp is clearly intended for shotgun-style microphones, we find it works just fine with NT-4 after deciphering their directions (this video helped). I had to do a little hack to get the cable routed through the handle, but within a matter of minutes everything was hooked up. Then, to go out and record stuff.

Our first recording with the Rode NT-4/Blimp combo was in September, 2010, for the pilot of our new serial, The Cleansed. We were at a regional airport with steady breezes all day, necessitating the wombat to come out and play on some occasions: 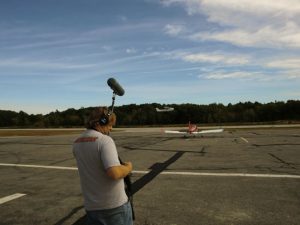 On location recording for The Cleansed, a new post-apocalyptic sci-fi serial to air on WKIT the “Rock” of Bangor. Recorded at Biddeford Airport, Biddeford, Maine

I’m not sure how to vouch for the quality of this set-up other than to share some comments on our production:

“Having done a few location recordings, I know how much time & effort goes into it, and all the quirks one has to deal with including unwanted extraneous sounds etc. Super job. I am impressed.” – Tom Lopez of ZBS

“In so much drama it’s just about the voices. Here you connect with the sheer physical effort. You can sense the actors sweating.” – John Dryden at BBC Radio 4

So, yeah. While we could have gotten results with inferior equipment, I was proud to run 30 hours of sessions knowing that we had real quality gear behind us.

In fact, I’ve enjoyed the kit so much that I’ve been taking it places it probably doesn’t deserve to go, such as outside of my house in the middle of a good ol’ Maine Nor’Easter this winter:

This bit of fan love was not paid for or subsidized by Rode in any way, though they have later sent me free schwag reviewed elsewhere on this website. The BH Photo Video links will support us if you clickthrough and end up buying something. We hope you will.