There are a couple of different camps in the audio drama community when it comes to studio vs. location recording, and I fall devoutly in the latter, both of out necessity and artistic aesthetic. By the end of reading this, I hope you’ll be on the same page with me, but before we get there, let’s get some definitons out of the way.

When it comes to producing audio drama, you have a few fundamentally different approaches to choose from:

You get your script, you cast your actors, you have everyone who’s involved come to a studio and record them in the best manner you see fit (stereo or mono, multiple mics or single mic, etc. — that’s an article of its own).

You cast your actors from all across the globe, have them record their lines at their home studios or other recording location available to them, and then receive those lines via electronic delivery which you put together using post-production software. This way has been pioneered by podcasters and is pretty ingenuitive, allowing you to cast talent wherever they happen to be and allowing your actors to record on a schedule that’s convenient to them. However, this method necessitates a lot of post-production work to assemble the voice tracks and almost ensures inconsistency in quality/room timbre. You also lose the special sumthin’ sumthin’ when actors act in a scene together.

Field recording is essentially filmmaking without the camera — with all the associated benefits and pitfalls. While a little trickier for sci-fi and fantasy — it is, after all, a little difficult to find lonely castles and spaceships lying around — the general idea is to find a spot that resembles the acoustic environment of the scene in your drama and then go and record there. The benefit is a sense of sonic verisimilitude – you get those crooning gulls or chirping crickets in the take naturally – at the risk of having to deal with unwanted noise and, if you don’t get adequate permission, angry property owners. But it saves you an enormous amount of time when you get to post-production, the costs of renting out studio space, and maybe, just maybe, adds some magical quality you’ll never get in the studio.

What Works Best For You?

The approach best for you will vary on what you’re trying to produce, what your budget is, and what you want it to sound like. That’s the pleasure of being an independent producer — it’s YOUR story, make it sound like YOU want it to!

My first few stories (Day of the Dead, Tales from Williamsville, Fall of the Hero) were all recorded in the studio of my local community radio station where they gratiously let me record for free, then supplemented with field recordings of ambience and spot FX, and library effects and music. Day of the Dead also had a splash of “The Brave New Way” because two of the actors were actually recorded in New Orleans, and I had to splice their takes with audio I later captured for other characters in the scene:

Knowing what I know now (and having better gear), I would’ve recorded Day of the Dead completely in New Orleans, as man, you ain’t gonna find too many places with a richer sonic backdrop than that fair city. But the background sound that IS there (recorded with a wimpy portable mp3 player) does add quite a lot of “character” to the story. 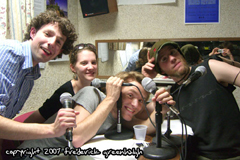 They look happy now, but man, it was crowded!

The follow-up stories were recorded using a series of Shure SM-58 mics fed into a mixer, with an individual mic for every actor as we crammed into a tiny recording booth probably meant for two people (this approach was a crude facsimile of what Tony Palermo suggests).

Were the space not so tight, this approach might have worked well, but I had some other problems, too. First off, the ostensible “studio” wasn’t really soundproof, so if someone stomped to or from the on-air recording studio during a take, we’d have to redo it (or live with it, which I’m shamed to say I did on occasion). I also was monitoring, mixing, recording, directing and occasionally acting all at the same time, which was just a couple too many balls in the air.

Oh, what is an independent dramatist to do?

It was about this time that I headed to the National Audio Theater Festivals’ (NATF) week long audio drama workshop, and learned about a million things I was doing wrong when it came to mic placement and recording. Concurrently, I was corresponding with Roger Gregg of the Crazy Dog Audio Theatre, who heavily encouraged me to try producing a show entirely in the field (as he just had for Infidel). And while I was a little skeptical at first (what if it rains? what if it snows? what if we get attacked by a rabid moose?), on my next story, “Dark Passenger,” I gave it a shot. 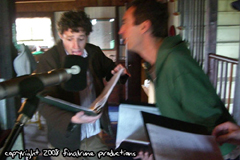 Philip Hobby is spooked during a recording sequence

“Passenger” was a huge step forward to me, not necessarily in terms of story (though I do find it delightfully gory) but in producing my own soundscape and customizing the recording environment. Just about every sound you hear in the story (apart from the car screeches) was recorded either in the scene or created — and a special shout-out to David Shinn who both showed me a lot of great tips at NATF and also volunteered his brain for some picking when I was trying to create a few particularly tricking sound effects.

“Passenger” still had some rough points, mostly due to lack of preparation and me single-handing the gear again, but I took everything I learned from that hastily assembled tale and poured it into “Waiting for a Window.” Which I’ll let you hear and be the judge of when it debuts September 26th.

What You Stand to Lose, and Gain

In a climate like Maine, you do have some challenges when it comes to field recording, weather being foremost among them. Winter is entirely off the shelf (at least for outdoor scenes) though you can’t even guarantee it’ll not be pissing down rain in the middle of July.

You also have to find places where people will allow you to record, either private businesses or public places. If you’re not paying anyone (like, as I said above, I just can’t afford to do), you have to deal with the fact that random people will be walking by and possibly nosing their way into your scene. You also have uncontrollable noise factors like motorcycles, oil barges, airplanes, chainsaws, semi-trailers and invasive european starlings (yes, I’ve had ALL of them ruin a take).

Then you have to GET everyone there, and find a time that the location AND all the people can be available simultaneously. Not always easy.

BUT… When you finally get there, when the ambience has just the elements you want in it, and the characters get in the groove… well, there’s something about it you just can’t replicate in a sound-proof room. 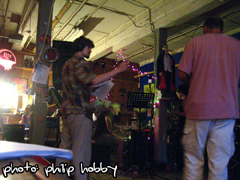 Directing in the Field Can be Fun

My friend let me use his band’s practice space to create a bar for “Waiting for a Window.” In this case, finding a somewhat controlled space was MUCH preferrable to using a real bar, as we had enough people to make it sound like a bar without random drunks intruding in the scene.

We had six people off to the side at the “bar,” full with appropriate props, including a few, um, “live” bottles, a separate area for the stage where the mysterious woman sings karaoke, and then another area with a table where the characters in the scene have their dialogue. We recorded it in a few takes, finally getting an almost continuous take, and when it came to post-producing it, all I had to do, literally, was cut out the junk and line up the tracks. No supplemental foley, no additional music mixing, no “make this guy sound off mic” effects.

Listen to the results:

So. You can beg, borrow, or squat on a location for free, saving you all the cash required to rent out a professional studio. But you still need equipment to record it, which is expensive, right?

As I mentioned earlier, I stole just about everything of my approach from Roger Gregg (ok, it was solicited advice) including my choice of equipment — a Rode NT4 mic. I paired it with a Marantz PMD-660, a wonderful compact flash recorder I’d been using to record the mix off the mono equipment hereotfore spoken of. 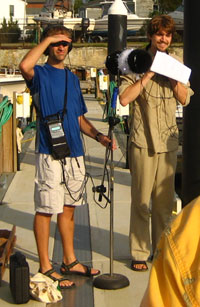 Marantz + Rode = Match Made in Heaven?

The beauty of the Rode NT4 is that it’s a fixed XY stereo pair, which means that if you’re a semi-luddite like me, and not a true technical junkie, you can set up your equipment quickly and not worry about arranging two mics to get your proper stereo positioning. Just put up your mic stand, flick on the phantom power, and start recording away.

I bought my first round of gear just months before they released an amazing recorder for this kind of work: the Zoom H4, followed soon by the Zoom H2. I grudgingly bought the H2 ($200), rueing the audacity of Zoom for releasing such a tiny recorder only a year after I’d bought a much larger set of equipment, but soon found myself in love with this, well, “handy recorder” (how’s that for truth in advertising?)

The Zoom H2 is to the PMD-660/NT-4 as the point-and-shoot camera is to the SLR. I carry my Zoom with me everywhere, capturing random sound effects, spot interviews, all my podcasts and for light-duty voiceover work (as it doubles as an audio interface).

While I put my pennies away for over a year in order to be able to afford the investment in the Rode, if you’re just starting out, and maybe aren’t even sure if this audio drama thing is for you, the Zoom H2 is a great recorder to start with. Use it to kick off your podcast, to record all the FX, your buddy messing around on guitar, and hey, your whole radio drama too.

What? Record an entire audio drama on a Zoom H2? Hell yeah. I’d do it in a heartbeat.

Whether you use the NT4 or the H2, you’ll be capturing stereo sound, which greatly compliments the efforts of your field recording. While your audience might not always appreciate the nuances of stereo, it gives you a rich sonic portrait you lose out in in mono.

I’m not a math guy, but here it goes: in mono, you have one axis: loud and soft. Soft voices are far, loud voices are near, and the listener determines the layout of the scene based on their interpretation of that scale. Cool and all, but in stereo you get that “y” axis — left and right. Suddenly you have a three-dimensional portrait of sound, which, to the listeners who DO get it, is very, very cool.

If you’ve got much gumption than green, ate the red pill and maybe slosh down a little bit of that special Kool-Aid for kicks, then field recording may be the way for you to go. It frees your actors from the constraints of working indoors, adding vitality to a scene while capturing a rich sonic portrait you’ll spend hours trying to create in post.

Will your listeners notice? Well, that’s where the different camps disagree. Some people will say that an exotic waterfall in South America sounds like their shower, and there may be some truth to that. But what you WON’T record in your shower is the experience that being in a remote area of South America contributes to your actor.