It’s no secret that I love field recording and especially handheld flash-based audio recorders. I’ve carried a Zoom H2 since they were introduced in 2007 and moved on to try out most of the rest of their line including the Zoom Q3, Zoom H4n and the Zoom H1. However, in preparation for my forthcoming trip to South Africa for five weeks it was time to take stock of my recording arsenal and ensure I had the right tool for the job.

The core requirement of my audio gear is that it had to fit into a single backpack along with all my other belongings for the full 5 weeks.  And of course, I need to collect fantastic audio.

I had recently purchased the Zoom H4n which served me well as a backup/supplementary recorder for sessions of The Cleansed, but when I took a hard look at it and my backpack, I felt it was time to shop outside my much beloved Zoom brand.

You can lose yourself for weeks in web research for these types of gadgets; I cut my search short by reading some of the fantastic audio gear reviews by Jeff Towne up at Transom.org. Towne’s review of the Marantz PMD-660 led me to buying that recorder back in 2006, which still serves me well today, and I highly appreciate his hands-on, practical approach to reviewing especially considering his public radio background (NPR freelancers, while very different from audio dramaturges, look for many of the same requirements as us).

It was there I first read about what was to be my new love – the Sony PCM-M10.

I’d never had the pleasure of owning a Sony portable recorder though I’d lusted over the PCM-D50 for years. The highly talked-up built-in mics, solid mic pre-amps, tough build quality and durability were all factors I liked. However, its $500 price tag, lack of XLR inputs, and just-a-little-too-bigness kept us away.

I found that the smaller cousin, the PCM-M10, had many of the features of the D50, as well as a few others that suited my needs as a lightweight, durable secondary field recorder:

There are a few other things I learned to love about this recorder which I’ll talk about momentarily. These were the features which sold me on it. Within a few days of reading Jeff’s reviews I had one on the way from BH Photo/Video. 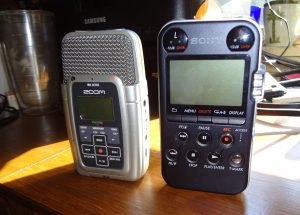 The Zoom H2 and Sony PCM M10 are almost identical in size. The PCM M10 is a bit slimmer and heftier. It lacks the surround capability and computer interface of the Zoom, but offers robust professional features such as a manual input gain knob instead

My first impression with the recorder was that yes, this was in fact as small as it looked on the internet. It also feels like a professional piece of equipment; holding it side by side with my Zoom H2, the Zoom feels like a toy and the Sony like something for grown-ups.

When I first starting doing this in 2007 I probably wouldn’t have noticed (nor been able to appreciate) the differences, but at my current level of experience here are the features that really stuck out:

I felt pretty good about my decision. And then I packed on a plane and flew halfway across the world. 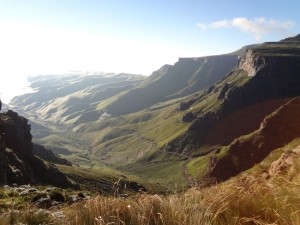 Lesotho’s Sani Pass. Okay, so there weren’t any sound recording opportunities here but it sure was spellbinding

This was my first trip to the continent of Africa and though my wife had done a lot to prep me from her previous trips, there was still a lot of not-sure-what-to-expect-edness from my end. How remote would I really be? Would I be able to buy batteries? Would I be able to upload material to the internet while traveling? What would be my backup scenario if my recorder was stolen?

Not surprisingly a lot of what I thought going into the trip turned out to be wrong and several things I didn’t anticipate turned out to be headaches. South Africa is a modern country in many parts, but nowhere was internet really adequate for me to back up any source material onto the web. Batteries, on the other hand, were plentiful and I felt stupid for carrying 30 AA’s with me.

Perhaps the most useful feature of the PCM-M10 is its size. Not much larger than a smartphone, I could easily keep it in my pocket at all times as I wandered around in order to snag random audio recording opportunities you might otherwise miss. For example, this random ice cream truck on a street in Johannesberg:

The minibus taxi rank in Maseru, Lesotho. Busier than it looks!

I did bring my trusty RØDE NTG-2 mic and dead kitten with me, but found that I made many fewer recordings with it than I expected. While the shotgun mic is far cleaner and targeted than the wide open and airy sound of the Sony’s built-in omnis, it was just a lot more equipment to pull out of my bag.

Practically speaking, I wasn’t going on a 20k hike with the shotgun mic nor would I travel a city street with it. Yet I could very take the Sony and clandestinely stoop in a building awning and record a busy market in Lesotho without attracting attention. Well, without attracting any more attention than you already do as a white person traveling that mountain country:

To the random passersby, the size and built of the Sony looks comparable to a Blackberry. Interesting, maybe, but not unheard of. A fuzzy shotgun mic and headphones make you look a lot more like an alien.

That being said, outside of the urban centers I was a lot more brave taking out the shotgun mic, and recorded some amazing tracks in the remote village of Malealea of their jingling-belled sheep headed out to pasture:

And I did have the opportunity to pull out the RØDE to record this fantastic thunderstorm. This alone was worth bringing the mic the entire trip.

We don’t get storms like this in Maine; while I have a lot of thunder/lightning tracks in my library none were quite as clear, crisp, and missing rain as these ones.

Here’s a nice clean sound of a thunderclap (good use of the lowered mic sensitivity!)

Why this is a Love Affair

Let’s be clear: the most important thing about any recorder is the material you come home with. You can wax and wane about this feature or that feature, but ultimately what matters is that you’re comfortable with the recorder, trust it, and can use it to do your work. In the field you need to know your recorder well enough to do basic troubleshooting if Google is 8,000 miles away. You need to know what you need to pack in order to feel confident you’ll get what you came for.

It’s for all these reasons that I love the Sony PCM-M10. It feels like it was made by someone who understands audio recording. There are lots of thoughtful small features that you don’t even realize you need at first. In some review I read somewhere they talked about Sony’s robust experience making recorders from the Minidisc days back to Beta – and let me affirm, this experience shows. I do still truly love the Zoom recorders, they are fantastic for what they are, but comparing the H2 to the PCM-M10 is like comparing a point-and-shoot camera to a SLR. 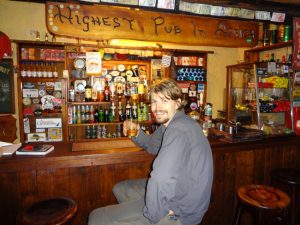 Fred toasts Yuri Rasovsky at the Sani Top Chalet, the highest pub in Africa. I learned of Yuri’s passing the 2nd week of my travels.

Like all love affairs, my tendency to gush shouldn’t overlook the flaws. The recorder is, after all, only $200 and cannot be perfect.

The built-in mics, while usable, are less useful than the X-Y cardioid inputs you see on most recorders of this size and, indeed, on its bigger cousin the D50.

Getting a windscreen to cover these mics is a nightmare. It’s pretty much a must to purchase a $50 windscreen to go with this recorder, but even so (at least the one I have, a Rycote) they don’t even stay on the recorder adequately without reinforcement. My solution was ultimately to hold the windscreen on using a rubber band. Surprisingly, this worked very well – but not exactly what you hope for when you spend 25% of the cost of the recorder on a windscreen.

Ultimately, what I don’t like about this recorder comes down to quibbles. For the cost, I feel I got an incredible value and can honestly say this recorder has changed my life in a small way: I’ll never be found anywhere without a portable audio recorder again. I’ve wanted a recorder that was small enough and good enough to go everywhere with me for years, and now I have it. Thank you Sony.

This is an unbiased review with no compensation offered to its writer. RØDE Microphones is an in-kind sponsor of FinalRune Productions. The author does profit for any products sold through product links embedded in this review.

A few ‘notes for next time’ from field recording in South Africa – in case this comes in any for any other recordists out there: