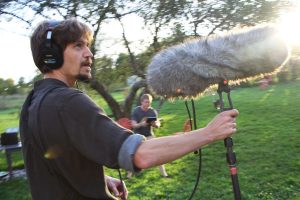 Published in February of 2020, Of Fae & Fiends is my most personal work to-date, which is a bit odd to say given the fact that it’s a faerie tale.

The story evolved from various walks my daughter Nyana (7 at the time) and I would go on in the woods, and the prompt “Dada, tell me a story,” which at some point became hooked on a large, moss covered boulder behind our home, and the possibility that underneath it was a tunnel to a fantastic world beyond. It all kind of spiraled out from there.

When we got to the production process, we (longstanding collaborator Bill Dufris and I) decided to do it in our emerging “Studio-Location Hybrid Style” which we pioneered in The Dark Tome, Season 2.

All of the scenes in the realm of Fae were recorded in our world-class audio drama studio located at William Dufris’s Mind’s Eye Productions facilities in South Portland. This allows us to record everything clean and to polish it in post-production and have fun with weird creature voices and other effects.

All of the scenes in the “real” world were recorded at my friend Jeremy Kasten’s farmhouse in Berwick, Maine, which was as perfect a set as you could imagine for this show. We stopped short of trying to train one of Jeremy’s goats to work in the show, but otherwise our location was pretty much identical to what the script called for.

Some people may think it’s a tremendous amount of work to do it like this, especially when we have a perfectly good studio to work with, but there is nothing quite like the sound of — for example — speeding down a country road, twisting onto dirt, slamming a car into park and bursting out yelling into a great big field.

An audio drama is only as good as the sum of its component parts.

That starts with the script itself, which — while I’m biased — I think is very strong. I tried to harken back to works I love (Neil Gaiman’s memory that childhood is a terrifying place, and the sharpness with which 1800s faerie tales are told) while also subverting and adding to the fantasy genre. This is not a ‘black and white’ world, Faerie is multi-colored and vibrant, weird in the best way possible and the script remembers that monsters are always the hero in their version of the story.

And this cast – WOW! – we had an extraordinarily strong response to our first casting call and put together an incredible mix of talent, inclusive of returning close collaborators, as well as a number of performers we’d never worked with before.

One of the last projects I ever worked on with William Dufris. And it was a good one!

I could keep on going… The production itself has a strange magical energy to it in that the news was just breaking that Bill Dufris’s cancer had returned, and Bill had to limit his involvement due to physical restraints (like, his body couldn’t do it, not that we had to put Bill in a straight-jacket or anything). Bill makes a few brilliant cameo performances in the show, and when he’s in it, he’s IN – larger than life, the Bill Dufris that everyone know and loves, that steals fire from the gods, that has a consistent record of doing things that people tell him are impossible.

The final stage to this – MUSIC and SOUND EFFECTS. As of this writing, we’re still deep in this process, but we had the pleasure of working with Rory O’Shea, who did sound design for LOCKE & KEY and last year’s HOMEFRONT, and Peter Van Riet, the Belgian-based composer who has created music for our projects LOCKE & KEY, A JOURNEY WITH STRANGE BEDFELLOWS, and THE DARK TOME. Finally! We committed to underscoring the entire show, and brought on Frank Schulmeyer (a friend of Bill’s from the London days).

All of this is a way of saying… Don’t miss this show!