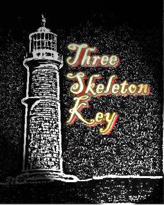 Three men who tend the light at a reclusive island off the coast of French Guiana see a rogue ship adrift in the Atlantic. The reason for the derelict ship soon becomes obvious – it has been overrun by hundreds of thousands of ferocious ship’s rats.

The rats land on the isle and soon we are in for a claustrophobic tale of terror as the three men struggle to keep their minds from cracking under the pressure of thousands and thousands of squeaking, scratching, hungry rats.

“Three Skeleton Key” is among the most famous of old time radio tales, and making something anew here was a challenge. FinalRune’s approach was to take a group of talented actors from the Mad Horse Theater Company and recording them in and around a real lighthouse to enhance the acoustic reality and physicality of the performance.

Many people have chronicled how much this story scared the bejesus out of theme when they were young. Learn much more about its history on the Escape and Suspense! Blog.

Recorded on location at Goat Island Lighthouse off the coast of Cape Porpoise, Maine. Special thanks to the Kennebunkport Conservation Trust and lighthouse keepers Scott and Karen for use of the facility.