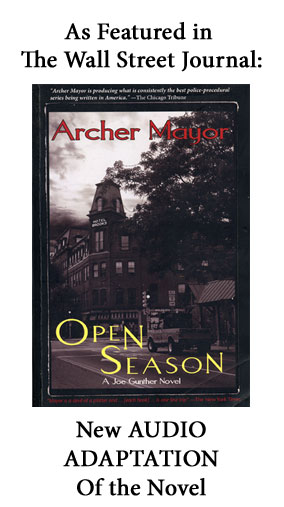 As Featured in the Wall Street Journal: Open Season, A Joe Gunther Novel.

An old lady tormented by lewd phone calls blasts a man with a shotgun as he walks in through the door, and Brattleboro’s everyman detective, Joe Gunther, is called out to investigate.

It’s clear that not everything is as it seems – the description of the phone calls and the dead man outside don’t match up.

And even stranger, the dead man and the old lady were jurors on the same controversial trial three years ago.

So begins “Open Season,” the inaugural Joe Gunther novel from Archer Mayor (THE PRICE OF MALICE, OCCAM’S RAZOR), an author who has earned lofty praise from The New York Times and Chicago Tribune.

Listen to the first episode of OPEN SEASON:

Behind the Scenes of Open Season