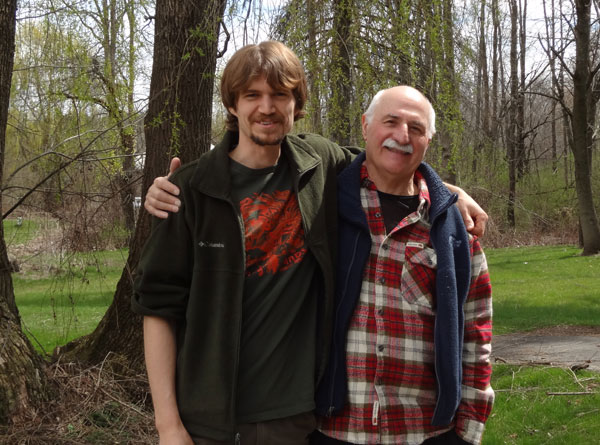 On Easter weekend 2012, Fred headed out across two-lane roads of NH, VT and NY to visit Tom Lopez at the ZBS Foundation‘s headquarters, an 1800s farmhouse in Fort Edward, NY.

A lot of radio history was made at this unassuming location sitting on 33 acres in the heart of New York’s dairy country. By the early 70s, Lopez had DJ’ed in Philadelphia, San Francisco, and Montreal, but he, along with some radio co-conspirators, were looking for a place to set down roots. That very nearly became New Orleans, but providence brought them to upstate New York instead.

In the early days, the commune hosted as many as 18 people, who lived, played, and made art on the farm. The freeform audio artistry merry mayhem resulted in the 1972 Fourth Tower of Inverness, the wildly original tale of a funky mansion that mixed up 50s radio motifs, mysticism, and gonzo gurus with enigmatic characters such as Jack Flanders, Little Frieda, Lady Jowls, and Chief Wampum.

Later, as Tom traveled the world collecting sounds all across the world, from Morocco to the Amazon, this was where the actors would get together to record the stories Lopez set in the exotic locales. Today, Lopez continues to create, having transitioned most of his recordings across the digital divide and experimenting with formats and distribution on the internet. As Fred arrived, Tom was in the midst of organizing the recording for Ruby 9, what will be the penultimate and final Ruby.

It was joy to soak up the radio waves (as well as to enjoy delicious victuals prepared by Tom’s wife, Marika). Among the interesting tidbits: ZBS was really podcasting before podcasting existed. Their shows, particularly Ruby, were released in short, serialized segments offered free to radio stations. Listeners would catch little nuggets of the story, and be given a phone number to call up ZBS to get a full catalog (these were in the days pre-internet). This method of giving the content for ‘free,’ while attracting something valuable – subscribing listeners – has helped keep ZBS going through the collapse of public radio funding and into today.

There’s no producer in the world quite like Tom. Not only has he released over a hundred hours of boldly original drama that pushes the boundaries of audio, he has done it without institutional support, giving him a creative freedom enjoyed by few artists on the globe. While trekking reel-to-reel and Sony Beta recorders into the Amazon might have been conceived by Hollywood sound designers, no one before Tom ever thought to go to such trouble for an audio production.

In the midst of the visit, Tom and Fred sat down for a long chat about life, the universe, and everything… All least, insofar as it relates to radio drama.

See some photos from Fred’s trip: