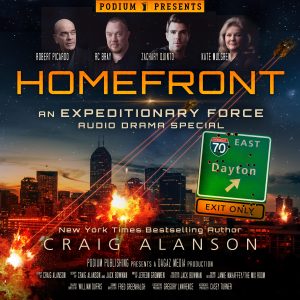 After the latest mission of the starship Flying Dutchman, Earth is safe not just for a year, but for hundreds of years. The ship’s weary crew wonders what they will do with their lives in peacetime, but the enemy has other plans, and there is danger on the homefront.

This stand-alone story is a must-listen for hardcore fans and uninitiated monkeys alike.

We had a BLAST recording this for Podium Publishing and working with creator Craig Alanson to bring the world of Expeditionary Force to life in audio.

Behind the Scenes of Expeditionary Force: Homefront