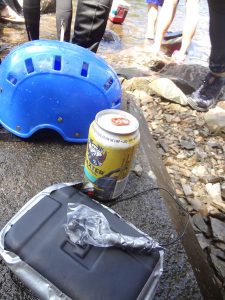 Warning: Do not try this at home. Well, I suppose you can’t – insofar as the story we’re about to tell involves Class IV Whitewater rapids on the Kennebec River in Maine.

So the mission at hand: there is a sequence in Season 2 of The Cleansed where our characters must descend a treacherous whitewater river in inadequate water craft. We wanted this scene to sound as big, loud, and scary as running an actual river is. As even the most experienced rafting guides will tell you – the river is in control. Give it respect. And when things go sour, well, go along for the ride.

This story ultimately involves us doing our best to waterproof some gear and then send it down a river, but let’s start with the setup of how we recorded this scene.

Let’s start with the script. Here’s how it reads:

One actor holds the canoe, and two others sit in it… The recordist is just off to the side.

We’ve remarked on the audio drama field recording process before; this sequence is what field recording was made for. You can send people to outer space, have heady, emotional drama, and EQ pretty much anyone anywhere while in the studio BUT having them be in canoes just doesn’t sound the same unless they’re in canoes.

So yeah, we put our actors in canoes.

For Season 2 we had upgraded to a Sound Devices 702 recorder, which is a fantastic rig (except for the fact that it runs on Lion batteries and we were short this day, so we had to jerry-rig a charger for our recordist that ran off a car battery and sat in a box in the canoe, but I digress). Our primary location mic is a RØDE NT-4, which gives us gorgeous stereo capture, while the RØDE fishpole and BLIMP set-up stood up to a steady 5mph wind.

The sequence has three canoes, two characters in each, so we did the same while recording. We grabbed two actors, got them in the canoes, and pulled them offshore a little bit – in a nice, non-moving, shallow spot, incidentally. We positioned the recordist at the head, so one actor was a little further from the mic, physically, though both actors were recorded on mic-center.

With tape (well, CF card) rolling, we started the sequence. The actors were physically paddling throughout the sequence, their scripts laid out before them. I held the canoe taut so they could not physically progress, but their breathing, level of urgency, and paddle strokes all felt naturally timed to the dialogue. As things start to get hairy in the script, I messed with them a little – pushing the canoe up or pulling it down suddenly as the characters struct rapids in the story. So all the little shrieks – while called for in the script – got a little bit of extra terror thanks to a particularly mischievous director.

And oh yeah, we definitely dunked our lead actors from the canoes so we could get that sound, too. Here’s me (waist-deep) with my RØDE NTG-2 shotgun mic, the recordist in the foreground is getting the stereo track: 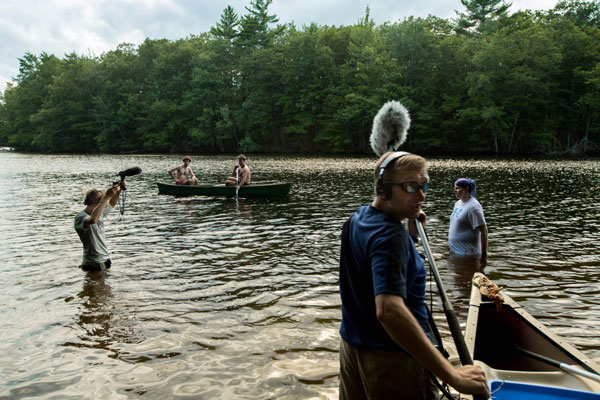 When all of this was put together, we had pretty solid bones to work with. However, one of the fundamental tenets of sound design is that we expect sound to sound larger than life, so there was still quite a lot of work cranking this thing up to 11.

Intrepid sound designers Matthew J Boudreau and Monique Boudreau of Aural Stage Studios got to work layering sounds they recorded at Niagara Falls to give the appropriate amount of ‘whoosh’ – while also amping up the canoe/rapids moments. There are nice little crunches against the canoe, roars and splooshes. One of my favorites is when the characters go under water – the ‘live’ sound is there, but it is amped up with sound design to be even bigger than the real thing.

Another thing the Boudreaus did magnificently here was to convey the sense of going under water – again, just after the characters are tossed from the boat, there is a moment where purely through sound design alone you’re imagining being under water and fighting your way above. Just a little bit of bubbly sound conjures the scene in your imagination. And as someone who has been out of control flying down a whitewater river… it was appropriately terrifying. 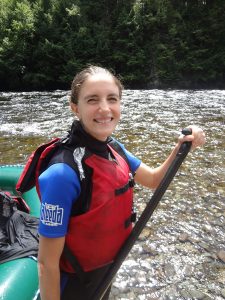 So if this was all so good, why the hell did you go whitewater rafting and capture a whole bunch more sound? Well, mostly because I could.

My employer, ReVision Energy, was already planning a company rafting trip and the challenge of trying to capture the sounds of the roaring river (while simultaneously not ending up in the water myself) was too tempting to resist.

In the end I think I over-analyzed it a bit, but here is what my recording set-up was, with some tips from various indies on the AIR list: 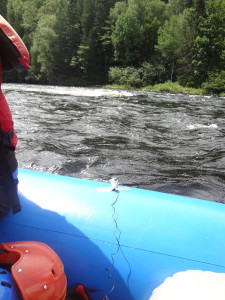 On later, milder stretches of river, I just strapped the SmartLav contraption to the side of the raft. As our guide said, “Use #4,671 for duct tape!”

Well, my wife got down the river without flying off the raft, and the recorder did not get soaked, and my recordings survived the journey. Check and check!

The SmartLav recordings, however, left a little something to be desired. I think this mostly had to do with the quality of the MP3 player – it just was not up to pro standards and for most of the harrowing – errr, more ‘sound rich’ – parts, it just peaked into oblivion. It did much better for quieter moments, such as picking up this really fun moment with our straight up Mainah’ guide, GW:

In my obsession to get a recorder through the gorge of the Kennebec River, I forgot a lesson I had learned during Season 1 of The Cleansed: that sometimes real can be too real.

What I mean, is – on Episode 3 there is a scene where the Refuge is torched by ne’er do wells. In attempts to get the right sound of flames, I went to a burndown of a real building and to several out-of-control bonfires – and in those cases, when fire is REALLY out of control, it just sounds like white noise. I did much better with a controlled (but still pretty raging) fire in my backyard, where I could stack up extra lumber when needed, capture the sound of sizzling coals, layer multiple tracks, etc.

Likewise, Class 4 whitewater rapids sound a lot like WWHWAHIIRRAAAOOSDSOSPPPLrAAUIIISSHSHHHHHHHHHH!!!! and I think would stress out even the most sophisticated recorder. 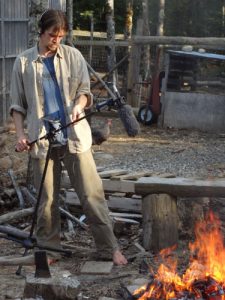 Recording “Fire” for Season 1 of The Cleansed. In the end, making my own controlled fire was the best way to do this

However, on this particular river there’s an opportunity to climb aboard the Raft on a milder 2nd half which descends into Class 3, then Class 2, then Class “Sit back and enjoy a beer” rapids. Here I could have totally gotten away with bringing the rig I found myself really wanting – the NTG-2 and the PCM-M10 – and I would have had the right tools for the job.

Still, all was not lost. After all, Aural Stage had done an awesome job with the sound design and all I was looking for were a couple flourishes. Mostly, I kept listening to the river a lot, asking myself, “Is there something about the character of the river itself that is unique and hard to replicate using foley?”

What I picked up on, sonically, was that the one distinct sound was the initial sploosh when the boat hit the water. There was a distinct sound to the crack of the boat into water that only happened when we were at substantial velocity. Slower waves just give you a ‘splat, splat, splat’ whereas the good rapids have a solid ‘whuuuummpp!’ with some real depth of body. So I cut out maybe 3-4 moments in the field recordings where we had good crashes, no one screaming and a minimum of peaking, then went to work seeing if I could rescue the takes and make them broadcast-worthy.

Here I give a shout-out to Izotope RX (a sponsor of Aural Stage Studios) whose RX tool did amazing things to the lo-fi recordings off the MP3 player. I am kind of an idiot-savant (or maybe just an idiot) but after running a ‘Declip’ tool and EQ’ing off some high end, the tracks sounded a lot more usable to me:

This audio was originally so peaked it was unusable. With a bit of RX, it was perfectly serviceable and we used it low in the mix to add breadth to the little canoe crashes in this scene

There’s a lot more that RX will do for you – spectrum analysis, decrackling, noise removal, etc. but having used it for about 5 minutes total, and being able to improve audio to the point where I could do something with it, was a straight up miracle in my book.

So 2-3 hours of dialogue recording, at least than much (or more) in sound design, 3 more hours whitewater rafting and then an hour or two more playing with the mix, we have this four minute sequence of audio drama. I hope you like it.

finalrune · Descending the River – From The Cleansed S2E2

Takeaways if you’re thinking about trying to record audio on a river:

Disclaimer: RØDE is an in-kind donor to FinalRune and gave us the NTG-2 and SmartLav mics. We purchased the BLIMP and NT-4 long before they sent us gear, and our opinions have not really been shaped by the fact that they gave us schwag. They also did not suggest, recommend, or otherwise encourage us to take equipment designed for nice peaceful video interviews into a Gorge. That was our idea.