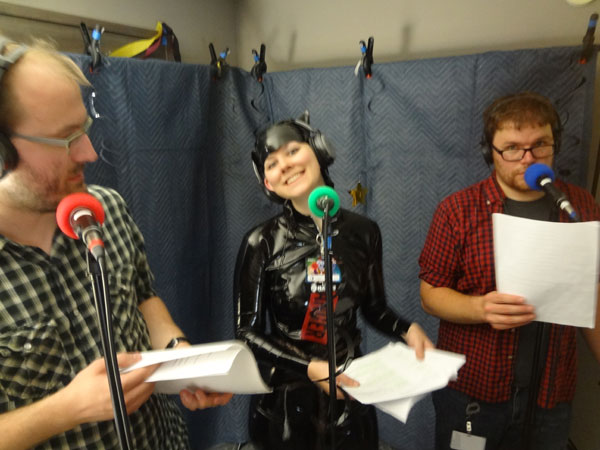 It’s not many places that you get to find random women dressed up in Catwoman costumes.  It’s rarer still to find ones interested in jumping behind the microphone and recording radio drama, but that was just the kind of scene you’d find at the inaugural Mark Time Broadcast Center held at the CONvergence Con in Bloomington, MN July 4-7, 2013.

CONvergence (which boasts an attendance in the 5,000 – 6,000 range) has long been home to the Mark Time Awards, the only sci-fi/fantasy audio drama specific awards in existence.  FinalRune has had the honor of receiving 2 Gold Ogle Awards (one for our 2008 “Waiting for a Window,” another for 2011’s “Intensive Care” with Aural Stage Studios) and 1 Silver Mark Time (for 2010’s pilot episode of “The Cleansed”).

For the past few years we’ve enjoyed going to this CON and meeting up with audio drama producers from across the country and across the world – it was at the CON that we got to meet the awesome talents of Aural Stage Studios, Jonathan Mitchell (The Truth), Dieter Zimmerman of South Africa’s Protophonic, Jack Bowman and Robert Valentine of The Wireless Theatre Company, Domien and Eline of Audio Epics, and many more.

But though we audio geeks love to get together and talk shop, we wanted to see if there is a way we could engage with the rest of the CON – the 4,980 people who did NOT already know about and love audio drama.  The Mark Time “5 Minutes of Fame” was born. 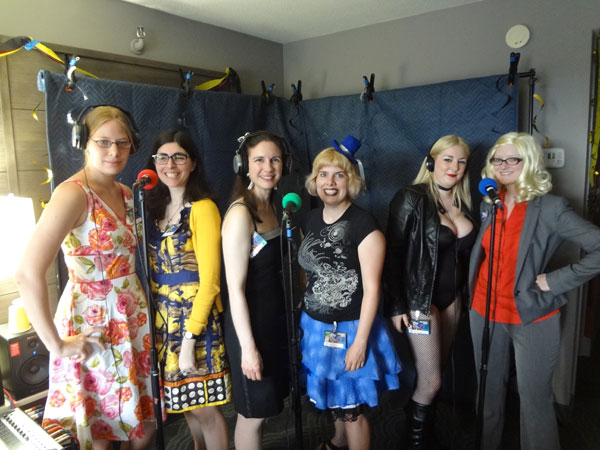 We plan to bring this event back home to the North Dam Mill in Biddeford, Maine for an event Friday, July 26th (during the monthly Art Walk).  The concept will be largely the same, with a few exceptions:

If you’re local to Maine, email me back and I’ll make sure you get details on the Biddeford event.

A big box of microphones arrived just in time for Fred’s birthday!

We’re thrilled to announce that RØDE Microphones has signed on as a supporter of FinalRune’s audio work, sending us a selection of microphones to help with our in-studio recording (RØDE Procaster), sound effects recording (RØDE NTG-2 and “Dead Cat”), and video efforts (RØDE VideoMic Pro).

The Australian audio company has a reputation for building quality microphones that sound like models that cost 2x – 3x as much. Their mics are all backed with an incredible 10-year-warranty and we have nothing but praises to sing for their RØDE NT-4 microphone which we use to record nearly all of our location productions.

With the mics unboxed we’re already enjoying being able to record better audio in-house (Fred previously has had to borrow studio space to do voiceovers) and are gathering some excellent location sound with the NTG-2.

If you’re as much as a microphone geek as we are, stay tuned to the FinalRune website where we will have reviews of the new gear including our testimonial after having used it in real world (and fairly unique) situations. Thank you, RØDE, we’ll make great use of the gear!

FinalRune Fred and Matthew Boudreau of 1918 trying out our new RØDE NTG-2 as we prowl for interesting sound at #cvg2011.

The awards are given out each year at CONvergence, a convention for fans of Science Fiction and Fantasy in all media held at the Sheraton Bloomington Hotel in the Twin Cities area of Minnesota, and so Fred packed onto a red-eye flight June 30 to head west.

This year brought out a record attendance of audio producers, including Brian Price, Jerry Stearns and Kris Markman of Great Northern Audio Theater, Jeff Adams of Icebox Radio Theater, Matthew and Monique Boudreau and Samantha Mason of 1918, Jonathan Mitchell (who created the spectacular Moon Graffiti), Domien and Eline of The Witch Hunter Chronicles, Scott Hickey of The Grist Mill, Cayenne Chris Conroy of TEKDIFF, and even Jack Ward of Electric Vicuna/The Sonic Society (contrary to rumors, there were no brawls, though there’s an exciting interview you’ll be hearing soon over at SS).

So, what happens when you get all of these audio minds together? Well, lots of beverages (both caffeinated and alcoholic) are drunk, conversation exchanged, and invariably, sound effects recorded. We logged a number of great interviews which you’ll be hearing shortly on Radio Drama Revival, and some other completely different ones will be on The Sonic Society.

We’re very proud of the award, though truth be told the best part was to connect with friends new and old, and to engage in some delightful synergy in what is at times a decidedly surreal environment (where else can you sip tea while Han Solo encased in Carbonite walks by?).

Brad Lansky and the Anti-Starc
Protophonic
Written by J.D. Venne 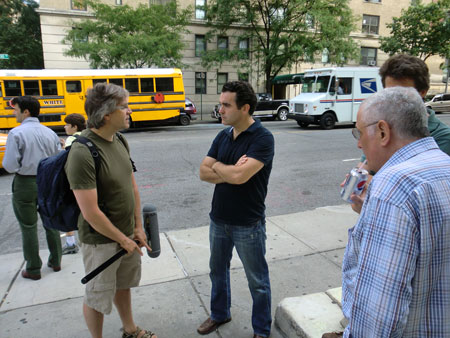 Yes, you heard that right! On Aug 1-3 we got the opportunity to record with John Dryden, an independent producer whose work is regularly commissioned by the BBC.

John’s impressive production credits include the Peabody-winning The Day That Lehmann Died, A Tokyo Murder, The Handmaid’s Tale, and Fatherland.

The show this time is Severed Threads, a mini series which follows three stories – an investigative journalist uncovering child labor in India, a boy in the United Kingdom obsessed with violent YouTube videos, and a born again Christian in Minneapolis who’s about to have his whole life unravel.

Each story was recorded in the continent where it takes place. In our case, we were recording scenes in New York City intended to take place in small town Minnesota – around a dinner table, in an office building, outside a church.

See some of the terrific actors we worked with during this scene, when Jim is sliced and diced by a television reporter:

The show will be airing on BBC Radio 4 in October, and we’ll definitely let you know when you can hear it!

In the meantime, check out The Day That Lehman Died (BBC Radio Stream) for a taste of this documentary-style field recorded radio drama.

After over a year of a pay-per-listen download program, FinalRune Productions is now please to announce that all present productions are being offered free through the website (and also through an RSS stream). After much thought and debate, the decision was made that increasing the audience is better than generating extra revenue through MP3 downloads.

To that end, get listening! FinalRune sincerely hopes you’ll enjoy the stories available through this site, but hey, if you ARE willing to help support new original audio stories, the donate button is available in full-force (see right) and you’ll hear multiple pleas on the new mp3 files.

Thanks for listening, and for your support.

Wow! A great time was had at the National Audio Theater Festival in West Plains, Missouri, with a completely blow-by-blow available on Radio Drama Revival! In short, Fred got to meet tons of audio theater’s most passionate professionals — including the legendary Tom Lopez — as well as lots of young people who are likewise madly in love with this obscure art form.

I’ll shortly have the photos up from the whole event, with minimal omissions to protect the innocent. Until then, good listening!