The best way to keep up with the latest happenings with FinalRune is to sign up for our newsletter – it’s where you’ll get updates about new productions, exclusive photos and video, and the links to downloads themselves (we usually post stories in our newsletter before they go up on the website)!

Here Are Some Emails from the Archives


“No ideas but in things.” – William Carlos Williams 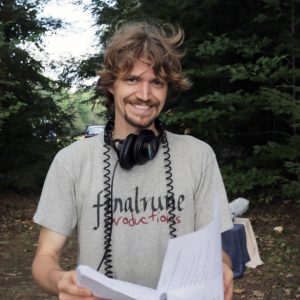 Fred’s career started with his original series, THE CLEANSED, which led to him catching the attention of Audible, and ultimately the opportunity to team up with audio legend William Dufris to develop LOCKE & KEY as a faithful 13.5 hour location recorded audio movie (feat. Tatiana Maslany, Haley Joel Osment, and Stephen King).

This was followed by THE X-FILES: COLD CASES and STOLEN LIVES (feat. David Duchovny, Gillian Anderson, and many of the original cast members), THE MAYAN CRYSTAL (with Gen-Z Media), and EXPEDITIONARY FORCE: HOMEFRONT with Podium (feat. Zachary Quinto, Kate Mulgrew, and RC Bray). His original work includes critically-acclaimed THE DARK TOME and OF FAE AND FIENDS, released as Stitcher Premium exclusives.

Fred’s also the founder and original host of RADIO DRAMA REVIVAL, which continues in its 15th year with host Elena Fernández Collins at the helm. A tireless advocate for audio fiction, Fred’s efforts to promote the medium include offering a free online course teaching audio fiction, speaking at conferences around the world, and features in many of the world’s most influential media publications.

He and his family live in an off-grid home in rural Maine that he and his wife built. They have many goats.

Here’s the latest from FinalRune Productions – our news on upcoming and ongoing projects, and what other people are saying about us!

Here is the final Rune belonging to the Cycle of Initiation. Drawing Dagaz often signals a major shift or breakthrough in the process of self-change, a complete transformation in attitude, a 180-degree turn. For some, the transition is so radical that they are no longer able to live the ordinary life in the ordinary way.

The Book of Runes by Ralph H. Blum

I stumbled across this bit of text years after I’d been using the moniker “Final Rune.” It was a completely random set of words to choose, originally, but the phrase seemed to fit, was easily memorable, and no one else on the Internet was using it.

The more I’ve learned about runes and particularly Dagaz, the more the symbol fits with my ambitions as an individual artist and as part in creating an entity that will hopefully transcend me. Long before I thought about using radio drama as the means of my art, I was committed to stories that dashed off the beaten path of literature, flirted with the boundaries of genre and twisted the naive heads off the rules while they weren’t looking. I enjoy fiction that is surreal, even psychedelic, yet rooted in mysticism, mythology, and folklore. “Final Rune” embodies a boundary between the physical realm and the mystical one, between history and future, between something ancient and the thoroughly modern. I attempt to create stories that dance this fine line.

Though I hope my work is not as misunderstood or lost in the annals of time as the true runes, I do reverently respect their mystery and hope that at times I can reach in that next realm to steal a nugget of wisdom. It is a risky dance, with cliche on one precipice and obscurity on the other, but conjuring one sublime moment to one person along the way would be more repayment than I might ever ask. In the meantime, I hope to entertain in the best way I can. 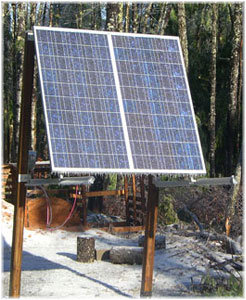 Producer Fred Greenhalgh’s off-grid home studio is powered by solar. This photo was taken during a power outage… for most people, that is!

In addition to being really fun to both record and listen to, FinalRune’s audio stories are produced using clean energy from the sun.

When he’s not writing or producing radio plays, you can often find him in the garden or milking a goat. His small off-grid house uses only about 2KW/hr of power a day, about the same amount as a regular light bulb if you left it in all day!

In addition to just really being psyched about living a sustainable lifestyle while doing what he loves, Fred also works as the online marketer for leading Maine solar power and solar hot water installer, ReVision Energy.

A low-impact, buy local, sustainable living and art philosophy is at the heart and soul of FinalRune.

The energy you’re using to listen to it is clean, too, right?