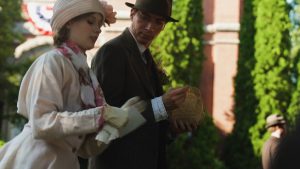 Milton Ford and his betrothed, Rose, in a scene from the short film 1918

We made a movie! With filmmaking partners Christine Marshall and Jeremy Kasten, Fred Greenhalgh of FinalRune produced his first film, 1918. The 18-minute short tells the story of Milton Ford, a young man who’s studying in Boston in the Fall of 1918, when a great evil breaks out. Based on the larger mythos from the podcast series The Dark Tome.

The film is part of Damnationland 2018, a film festival of Maine-made horror films.

It turns out that our extensive experience recording on-location radio drama pivots well to doing sound for a movie! We recorded all dialogue on our primary field kit, consisting of a Sanken CSS-5 w/ Rycote boompole, and Sound Devices 702. We went with Zoom F1 lavalier units for the cast and also stashed stealth Sony PCM-M10’s at various places around the set. We also did some weird stuff with binaural we plan to use sometime when we produce a 5.1 surround mix.