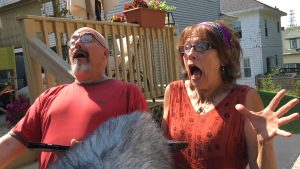 James Herrera and Lisa Stathoplos as the agents of evil

For Season 1, we had a fantastic opportunity to produce a story by Joe Hill and came up with the conceit of Cassie, Gussy, and the magic book, but only had a vague idea of how the overarching storyline would develop. By the end of Season 1, where we reveal how Gussy got the book and start painting out details of his personal life, we knew a lot more about the fictional town of Simpson Falls, Maine, and spent the next year fleshing out the larger mythos of the Dark Tome.

For Season 2, we arranged all stories in advance and wrote the script as a single through-line story, and recorded it as a cohesive event; meaning, the stories are much more interconnected than they were in Season 1, and Cassie’s story arc becomes much more important as she starts to really come into her own as a character.

Whereas in Season 1 Cassie was a youth who was playing around with magic and without much control over her situation, in Season 2 she finds herself without her guide, Gussy, and forced to face an insanely hostile world. Only through true friendship and by finding her inner strength, does Cassie have any hope of staying alive and saving the multiverse.

Since Cassie’s throughline takes place in the ‘real world’ (whatever that is), we decided to go back to our roots, recording this section of the storyline on location, as we did for Locke and Key.

So yup, back to shoving actors into the backs of cars, running around outside, up into bedrooms, etc. as we create a visceral, immersive sound environment constructed similarly to how a film is made.

For the interior of the Dark Tome stories, we stayed with an in-studio approach, allowing us to make the adapted stories feel ‘super-real’ with a constructed reality that is less gritty than the real world. The extra fun part about the Dark Tome is that we get to have a guest cast on every interior story, so the breadth and diversity of acting talent is really impressive, as we leap from dystopian Toronto to a cul-de-sac suburb in anywhere America to a post-apocalyptic Caribbean island and to stranger places, indeed.

We hope you’ll enjoy going on the ride as we much as we enjoyed building it!